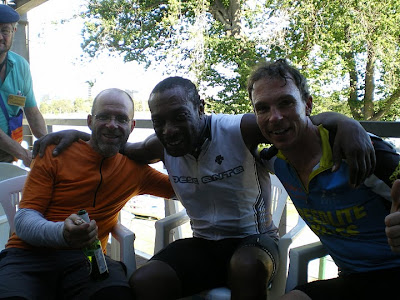 There is a Wallaroo in my head
Who never, never goes to bed
All nite like cicadas, so fascinating
Always, so response evoking

Many things shall never pass me by
To fight him, I no longer try
I just keep my eyes open to see
For the little Roo in me.

"He's got a kangaroo loose in the upper paddock"
-Simon Maddison on learning in Corryong that I was on my fourth Grand Randonee for 2009. 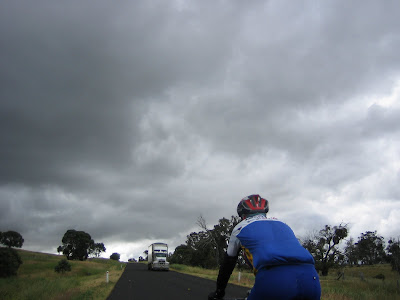 We were headed for the Snowy Mountains or the "Snowies" as they are referred to in Oz. They are part of the Australian Alps the highest mountain ranges in the Continent and part of the Great Dividing Range that straddle New South Wales, the Capital Territory of Canberra and Victoria. These ranges were inhabited from time by Aboriginal tribes and the ranges initially presented an obstacle to British settlers seeking agricultural lands east of the range. We would pass through Cabramurra the highest inhabited town in the Continent. Running in the direction of the Hume Highway, we are rolling upward for about 125 klicks to the first control in Mittagong. It is beginning to get rather hot and humid and I am concerned. I will need some time to acclimatize after so much winter riding. There is a faucet in the Park and I wet down while worrying about my depressed appetite. Between Mittagong and Goulburn I skip a chance to refuel and suffer for it. Kole is wound up like a spring ready to release its potential energy, I reassure him that all will be well. By Goulburn I am starting to reassure myself also. The Greengrocer Cafe in Goulburn has all kinds of expensive bikes as part of the Motif. These interested me more than the assortment of edibles. I am able to push a couple of cokes down and a few calories.
It was Shakespeare in the "Merchant of Venice" that wrote.
"The quality of mercy is not strained
It dropeth like a gentle rain from heaven
It is twice blessed
It blesseth him that gives and him that takes"
So the gentle rain came and by the control at Gunning I felt quite capable of keeping all these promises. Rode with Phillip who we had met at Critical Mass, a Pediatrician and their riding buddy to the Capital Canberra and called it a night.
We had done 366k, more than the minimum distance of a Fleche, with 13,000 feet of climbing to boot, we are in Kole territory.
Intrepid French Randonneuse Sophie Matter had read the wind and rode on through the night, we take 5 hours of unwind, refuel and blissful sleep and re-saddle for the road to Cabramurra. 127k to Cooma, the next Control, we are trashed by 25mph winds both climbing and descending, I urge Kole to go on ahead and I keep low like the proverbial grass to let it pass. I even passed (no pun intended) on the train of a strong group of riders in that wind. Finally galvanized by the thought of how dangerous it would be to let Kole get a significant rest in Cooma, I stepped it up and picked up Rick Blacker and Simon Maddison just before Cooma. Found Kole ditch-napping and dragged him to a nearby restaurant and we had steak and fries, for the real climbing. Simon decides to join us and we pedal now as a group of three. 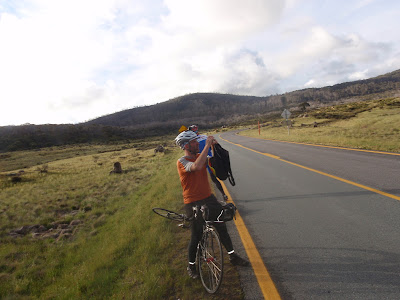 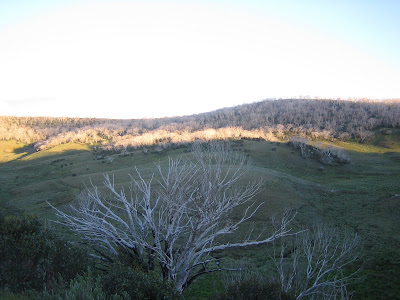 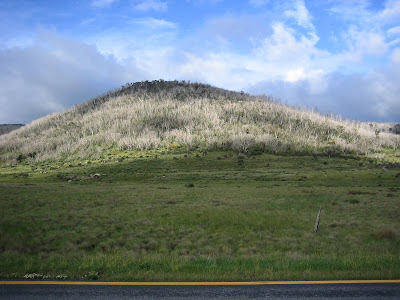 Next stop Cabramurra. It is cool and good climbing but we are wary of ice on the steep descents before the next steep climb. as it gets steeper Kole pulls ahead, soon we have all made it to Cabramurra the watershed. As we refuel there are a lot of Randos in the shop, the air is electric with a strange melange of exhaustion and exhilaration. Kole opts to split early, Simon and I follow shortly. Both of us are descending so fast (look out for Wombats) to Tumut Pondage, we whiz by Kole, but this is the low-point of the steepest most sustained climb or so it seemed. There is mayhem on this climb, riders are getting off the saddle and resting or walking. I promise myself to hold strong and focus on Simons blinkies just a little ahead.
When Kole gets off his seat to pedal, and that is a rare sight, it is like Michael Jacksons Moonwalk played in reverse. And just like that he was up and away. Slight technical issue, my Garmin charger was stealing the poor electrical current at the low speed from my E3 lights in that dark night. I pulled the plug on the charger, slowing a little, but still focusing on Simons tail-lights. By the top he was still visible, I stopped to reconnect the charger for downhill and Simon was gone. In the black liquid ooze of that night the only thing I could see was the Ay Up front lights of 2 riders coming up behind me. One of them was Andrew Bragg but I did not know him at the time.
I hurriedly connected and waited to join them, riding behind and that is when it happened!
Deja vu or an Edgar Cayce type trance, but I had seen this all before! I knew exactly what would happen next. Downward now through Tooma Dam and finally up to Corryong, I was happy, I was singing. We picked up a third rider and lost Andrew to a flat. 2 Aussie riders now behind me sensed my confidence and stuck behind. 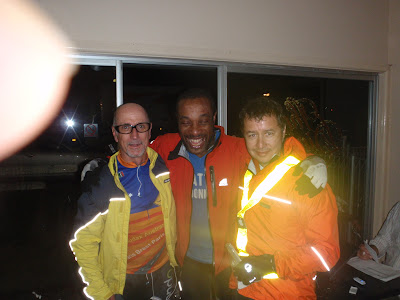 At Corryong Kole and Simon were still unwinding.
Day 2 adds up to 316k by my instruments and 16,000 ft of climbing, somehow I had lost a water bottle and the cap to the second one.

Thanx to the Gentleman who loaned me his bottles in Corryong.
I still have them.
Posted by Vincent Muoneke at 9:56 AM 3 comments:

"Just another nasty reminder that it's not just about Skittles and Beer"
-Aussie rider on one of the last steep hills before Melbourne. 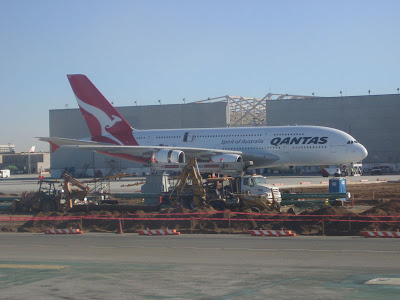 I had heard from Rick B. who had heard from Sophie M. and I had told Kole that there was going to be a Walkabout and Dreamtime. I first confirmed that we would be sparing not spearing any encountered wallaroos and I was in. It was easy to convince Chris Rogers, Organizer of the 2009 inaugural run of the Sydney to Melbourne Alpine 1200, since we were "internationals" and not only were the Audax Australia membership fees waived, we paid for the Randonee on arrival to Sydney. In Oz they are relaxed about that sorta stuff.
Kole and I, we split up the logistics. I handled the planes, trains and youth hostels, Kole assured our near flawless navigation in a Continent Country which both of us had no prior knowledge of, through scores of email and Bike Route Toaster. When we got the route sheet only a few days before we left, Kole had the "TCX Courses" up and distributed to all the "internationals" the same day. Great! I was not in for "bonus miles" in the great Outback. 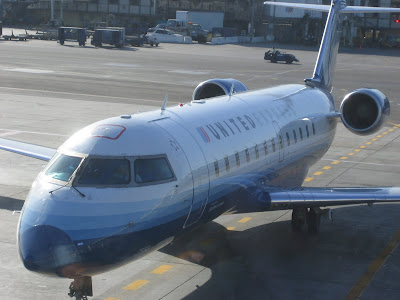 We were set! Just one problem, how to get rollers on the commuter that took us from SEA to LAX so that Kole could ride to the ride. I had choosen an 8 hour lay over in Los Angeles over a 11/2 hour one to reduce the chance of arriving without our bikes in Sydney. and with time in our hands on Thanksgiving Wednesday we greeted a Turkey that just received a Presidential Pardon. 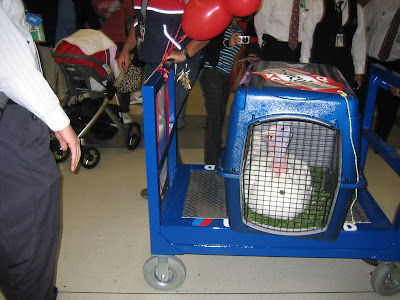 In the hoopla we met Janet and Johnny returning home on the same flight, who gave us already a warm feeling about the Aussies. 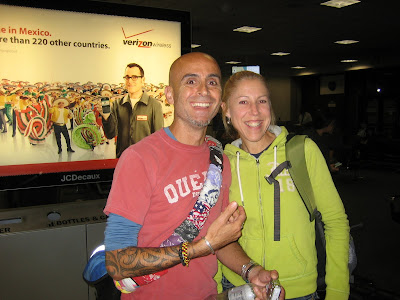 Fairly restful slumber on the long flight, shortly after a winter 300k (Monroe-Marblemount-Monroe) I woke to this view out of the window just before landing in Sydney. 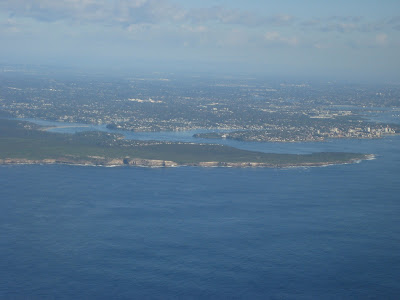 But knowing that there was no time for Sun and Surf or a drink with an umbrella in it (we left Wednesday and got there Friday). We got ourselves quickly to our Hostel and Oooh it was small for 2 men and their bikes. 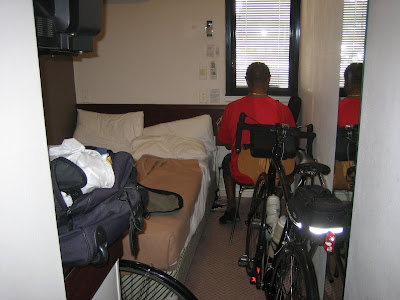 Bikes built, we tried our hands at riding on the wrong side of the road and it was time to go meet Bindi who had kindly e-mailed the "internationals" and informed us about "Critical Mass". 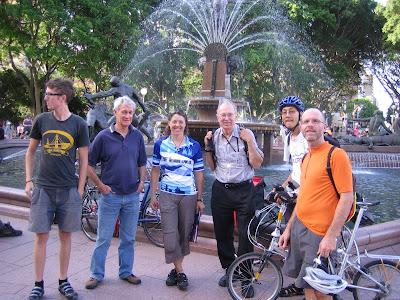 We found her were she said she would be "hugging the fountain" in the park and we had a chance to improve our skills riding on the left on the one day that bikes are allowed to ride in the car lanes across the harbour bridge. 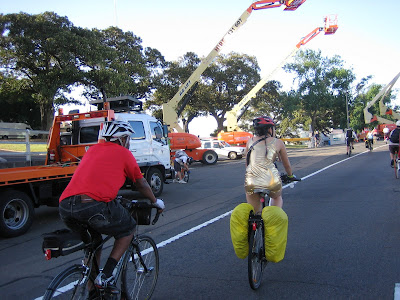 There were several distractions but we were getting a hang of it and thanks to Bindi and several Aussie riders we got safely back to our little hole in the wall while enjoying our first sunset in the Land Down Under. 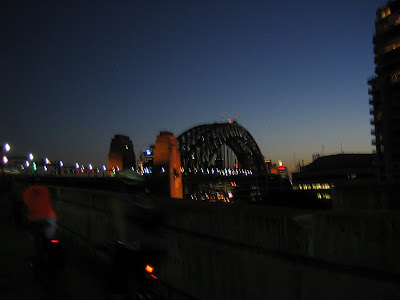 Saturday was housekeeping and we took the train which was essentially in our backyard with our unwieldy bike boxes to Lindseys house. Super Host Lindsey! and Nice home, there was lots of beer and chips, no Skittles though. We completed our business with Audax Australia and Bindi helped with a great exchange rate (dollars). Took the train home, bed early. 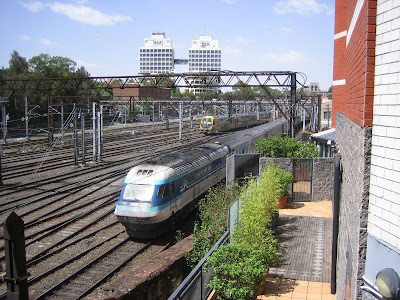 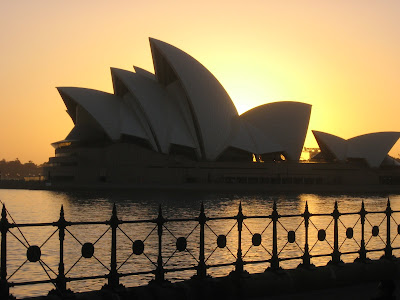 For those magnificent men and women and their flying machines. 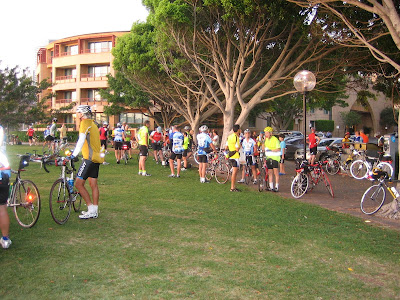 Chris Rogers reminded us that it was a social ride (indeed) and we were off, The Sydney Chapter of Audax led us in a large peloton out of Sydney and then you were on your own. 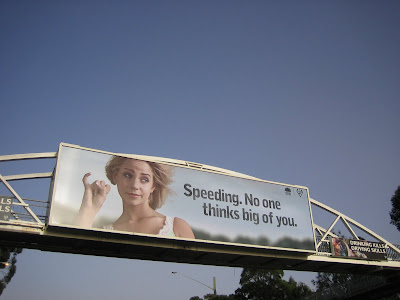 At my pace I felt quite certain that she was not referring to me. 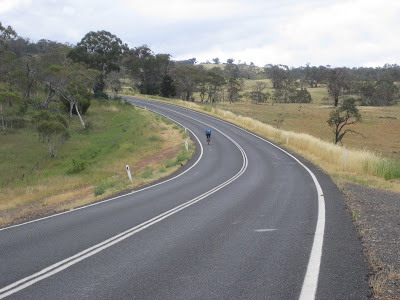 But as we got deeper into the big open country, I admit I started to feel rather small.