The logging of the Pacific Northwest's ancient forests is infamous, yet I remain enchanted by the beauty and abundance of Oregon's forestland. Equally impressive is the network of forest roads, these roads are essential to the management and enjoyment of these forests, not to mention fire control. But it appears a good number of these roads were built when timber production was seen as the primary function of the forest. I guess "every silver lining's got a touch of grey".
In September of  2009 I had done the Barlow Trail 300k that started and ended in Sandy, the date of the ride had been postponed once because of the extreme heat in the Oregon desert.
No wonder I tuned into the Pre-Ride of the Tygh Valley Traveller 400K.
I could not ask for a better Travelling companion, Theo Roffe and I set off by 0500 on Saturday in a leisurely manner. Winding our way South from Portland's North Harbour avoiding city traffic by the use of bike trails. We munched on smoke salmon down In Estacada, filled our bottles and found the OR 224 E that took us all the way to Ripplebrook. After brevet  business and small talk we plunged into the featured attraction, the Mount hood National Forest by courtesy of the forest roads. NF57 to 58 and then 5810 which led us to the portage at the Anvil Creek Crossing. Most of the Portage zone was ride-able in my 28's yet nothing wrong with a little extra care. I did not hesitate to get my feet wet. Hooking up further down with the 57 we  came to the Pine Point Campground. Only found a camper with his son to sign our cards we filled up our bottles with the sour water and made a bee line for Maupin, loosing our beloved forests and its shade. Headwinds on the US 197 may have kept us cooler. We had ice cream at Maupin and decided to catch an open store in the Tygh Valley. We caught it with 1 and !/2 hours to spare and cashed in on our time in the bank cooling and refreshing. We left just before the store was closing and backtracked in the Tygh Valley on our way to find the forest roads, Barlow Pass and Mount Hood in your face. In the heat of the day, lots of climbing, our progress slowed. By Government Camp it was getting cold and I was definitely behind on my fluids. Spent close to 2 hours at the camp recovering at the Huckleberry Inn which is open 24hrs, with a sit down meal . I know the descent from the camp, but had heard rumors of the last 100K. Names like "Devils Backbone" and "Bull Run" rattled the imagination. In the end It was all good fun especially the descents. One Impressive descent took us down to Troutdale and a rather long pancake flat section finished of the ride
Looks like 16 thousand feet of climbing by my instruments, though both Bikeroutetoaster and ridewithGPS peg it at 19 thousand. Looks like the return from Maupin is a little more difficult than the trip out so I would consider that in planning. 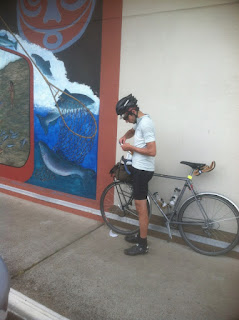 Thanks Theo Lynn and Susan
Posted by Vincent Muoneke at 12:03 AM No comments: