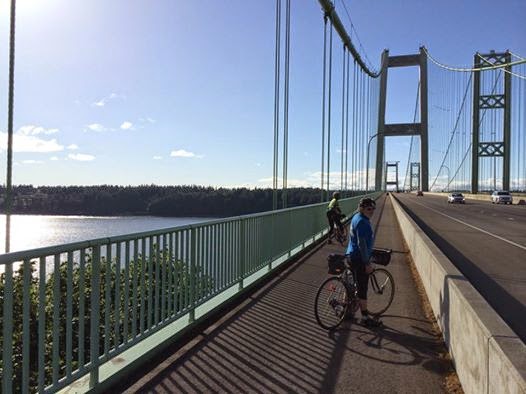 Looking back on the Narrows at Tacoma presented a photo op and Mark took it, after all it had only been raining since we left Tokeland after a good night's sleep. I could not help but wonder if Tsunamis get named, hurricanes do, and the bridge that once stood here had one. That was before the climbing began, I decided that if this ride were a Tsunami, it's name would be "Annie". "Annie Tsunami" kinda has a ring to it.
We started 0715 at the Starbucks in Bremerton, Rick and I had arrived Via WA 3 and waited for Mark who arrived shortly by Ferry in time for the timely departure. We went down Burwell to WA 304 and to avoid the drama of getting to Gorst via WA 3, we made an early right on  Rodgers to climb a little and come down with a lower heart rate getting on Belfair Valley Rd.
The weather was good and Mark and Rick stopped repeatedly without as much as a glance at the watch to make copious notes to craft a reliable Cue Sheet. At Belfair we joined the WA 106, it's a bit early but services are available. We did not run all the way to the Purdy Cutoff, but took an earlier left on Trails End Rd. just after the place with curios placed in front. This provides a more direct route to Shelton through Mason Lake. We signed our cards and refreshed at the control; The Airport Grocery and Deli and headed to Matlock.
We Ignored the store at Matlock, which will be there if you need it and continued straight towards Deckerville, turning right on Cougar Smith to tackle the the Gravel Climb. I had 28's, 32's would have been better. Now in the tracks of the "Watery 600k" our next stop was Humptulips, a control and a number of service options; a Grocery Store(the control) and a Gas Station. We leave the US 101 at the Gas Station, making a left onto Kirkpatrick that will bring you into the heart of the Tsunami Zone.
At the next control at Pacific beach there are a few options, We choose the restaurant and have a sit down meal, we inquire from the locals what the road is like between here and Ocean Shores, we get two opinions. "It is twisty, up and down". "It is beautiful".
They will be both correct, a fog is rolling in now from the Pacific now, so we get rear lights on.
We have to find and answer 2 questions in Ocean Shores before returning to WA 115 then WA 109 that brings us to Arbedeen via Hoquiam. We prepare for the last leg of the day in the Aberdeen Safeway and then catch the WA 105 to Westport and Tokeland.
Morning in Tokeland, the sky is crying, the streets are full of tears, the rain will come down till we are close to Tacoma. We dash for Raymond for something to eat, The Chevron is 24hrs and the clerk is super cheerful that early, it is the control. We then tackle the 4 rollers of the 101 in the wet. We decide to stop for a real breakfast after the rollers at Artic, good breakfast, but we did bring a little Tsunami of rain water into the shop.
We pass Montesano, watch the first set of railroad tracks into Monte, they have a bad angle, we ignore services here and in Elma on our way to the control at Mcleary. We run parallel to US 12 and over the Satsop river on the way to Mcleary and it is possible that the bridge over the Satsop will be under construction. It will be straightforward to shunt that section by getting on US 12 and then returning to the service roads past the construction.
After refreshments at Mcleary we went up to WA 8 which we left to enter Old Olympic Hwy that brought us to Delphi Rd. which took us to Littlerock, control and refreshment here and we went down Littlerock Rd. to Tumwater where we caught the Yelm Hwy to Yelm. Another control at Yelm and from there towards Lacey to catch the Old Pac Hwy and a very short strip of 1-5 to Dupont, by now you are consistently seeing the Dan Henry's for "Rhapsody".
Dupont to Steilacoom, there's also pretty bad rail tracks just past Steilacoom if you hit it wrong. From Chambers Creek, climb "snot nose hill" into the University area of Tacoma. 6th ave in Tacoma meets Jackson Ave on the steep side. Jackson is busy and to turn from Jackson into the trail (Scott Pierson) that crosses the Tacoma Narrows may be tricky. Use Caution here or consider using the side walk (on the wrong side of the road) on Jackson from 6th to get to the trail.
Across the Narrows we can smell Fritz's in Bremerton, Beer and Brats. but hold unto your horses buckeroo, Annie is Bottom loaded, with climbing I mean. The Cushman Powerline trail which runs parallel to WA 16 gives a taste of this but it gets worse after Purdy, careful turning into Purdy Dr. just before Purdy, as it exits off one freeway to connect others and was quite busy on Friday of the Memorial Day weekend, should be better next weekend. Now in the Kitsap a few steep one's before we are screaming down WA 3 to Gorst again and then up Burwell to the finish. 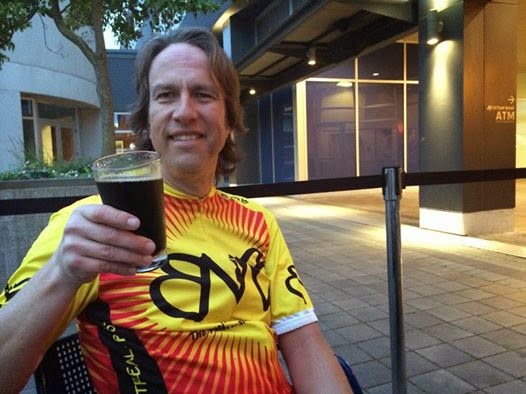 Annie is OK
Thanks Mark, Rick, and SIR

Posted by Vincent Muoneke at 4:54 PM

If you plan to ride straight through, services will be a bit spotty through the night. The Aberdeen Safeway control is a 24-hour store (177mi). We will have support at Tokeland (209mi). Raymond Chevron is 24hr (229mi). Just past US-12 on the way into Montesano, there is a 24hr Chevron on the left (255mi). There may be no overnight services at controls in McCleary (273mi), Littlerock (300mi), and Evergreen Valley (319mi). There is a 24-hr Jack-In-The-Box and maybe other services in Dupont (329mi). So be prepared to get the 74 miles from Montesano to Dupont without services.

If you leave Tokeland in the morning (we left around 5AM), there are no issues about services. And the breakfast at the Artic Tavern was a delight for wet riders.

Its a wonderful post and very helpful, thanks for all this information. You are including better information regarding this topic in an effective way.Thank you so much